A downturn in business activity across the euro zone deepened in September, according to a survey which showed the economy was likely entering a recession as consumers rein in spending amid a cost of living crisis.


Manufacturers were particularly hard hit by high energy costs after Russia’s invasion of Ukraine sent gas prices rocketing, while the bloc’s dominant services industry suffered as consumers stayed at home to save money.


S&P Global’s flash Composite Purchasing Managers’ Index (PMI), seen as a good gauge of overall economic health, fell to 48.2 in September from 48.9 in August, as expected by a Reuters poll.


“The third decline in a row for the euro zone PMI indicates business activity has been contracting throughout the quarter. This confirms our view a recession could have already started,” said Bert Colijn at ING. 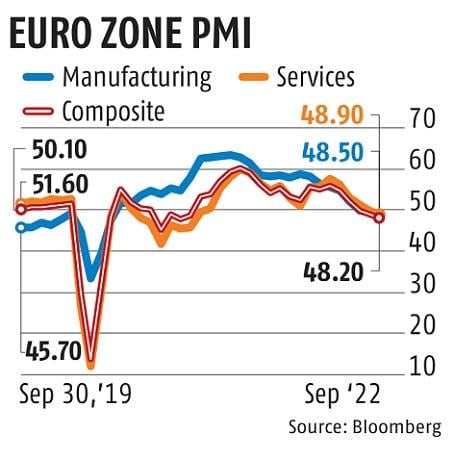 
However, in France activity was higher than expected although its PMI showed the euro zone’s second biggest economy was still struggling as a modest rebound in services offset a slump in the manufacturing industry.


The euro, German government bond yields and stocks all fell after the PMI data.


Overall demand in the euro zone fell to its lowest since November 2020, when the continent was suffering a second wave of Covid-19 infections.

(This story has not been edited by Business Standard staff and is auto-generated from a syndicated feed.)