Three major US banks are raising their prime lending rates to the highest levels since the global financial crisis of 2008, following a hefty interest rate hike by the US Federal Reserve.


The US central bank has remained steadfast in its decision to keep raising rates until data shows a sustained pullback in consumer prices.


The Swiss National Bank raised its policy interest rate by 0.75 percentage point on Thursday — only the second rise in 15 years — and said it could not rule out more hikes as it joined other central banks in tightening monetary policy to curb inflation.


The SNB increased its policy rate to 0.5 per cent from the minus 0.25 per cent level it set in June.


Bangko Sentral Pilipinas delivered its second straight half-point hike Thursday, belying guidance from Governor Felipe Medalla in the run-up to the decision on the need for only quarter-point adjustments. Bank Indonesia


followed shortly after with a 50 basis-point increase, surprising most economists in a Bloomberg survey who had seen a 25 basis-point move —the same as its last hike.


The Hong Kong Monetary Authority (HKMA) on Thursday raised its base rate charged through the overnight discount window by 75 basis points (bps) to 3.5 per cent, hours after the US Federal Reserve delivered a rate hike of the same margin. 
“Anticipation around a potential prime rate increase in Hong Kong has been ripe and today’s announcement marks the beginning of an upward cycle,” Luanne Lim, HSBC’s chief executive for Hong Kong, said in a statement.


Hong Kong’s monetary policy moves in lock-step with the United States as the city’s currency is pegged to the greenback in a tight range of 7.75-7.85 per dollar.


HSBC Holdings and Standard Chartered raised their main lending rate in Hong Kong for the first time in four years, bumping up borrowing costs for property owners and businesses.


The Turkish lira sank to a fresh record low on Thursday after the central bank delivered yet another surprise interest rate cut, this time of 100 basis points. The CBRT cut its benchmark rate to 12 per cent despite inflation rising above 80 per cent year-on-year and as other policymakers around the globe rush to hike interest rates to tackle persistent


Benchmark US Treasury yields hit an 11-year high on Thursday and a key part of the yield curve was the most inverted in at least two decades as investors positioned for the Federal Reserve to continue its hawkish stance toward hiking rates. 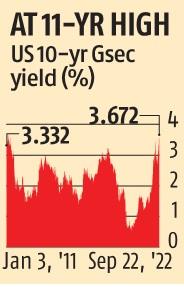 Yields eased from highs on Wednesday after Fed Chairman Jerome Powell said that the so-called dot plot of rate expectations do not represent a plan or commitment, underscoring the difficulty in forecasting the economy’s path.